Every Friday through December 18, we will be sharing RVC facts and photos from over the years right here on our blog and on  social media. Be sure to check the blog every Friday and follow us on all of our social media platforms as we will be posting unique content across all media throughout the year!

And All That Jazz

The first Jazz Festival at Rock Valley College occurred February 18, 1984 in the Performing Arts Room. Jack Simon, RVC Associate Dean of Letters and Sciences, spoke about how the Jazz Festival came about. He had the idea and worked with Dan Timko, Dean of Community Services, to implement the idea. Jack Simon recalls that Rich Matteson and Frank Mantooth were highly qualified Clinicians that staffed the first festival. Trophies were presented to the first and second place high school bands as judged by Matteson and Mantooth. Eight high school jazz bands from the college district performed at the first festival. The Jazz Festival continues today as the 2015 festival was held in February with several local high schools participating. 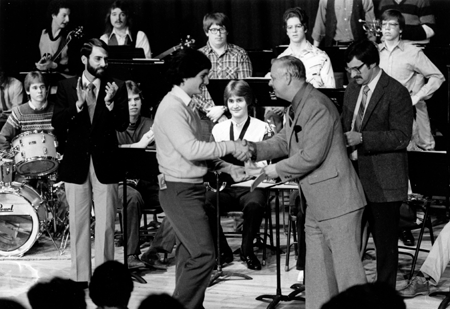 Karen Messley, associate professor of biology, presented on the topic of the AIDS epidemic in America in a First Tuesday Lecture in February of 1984. Messley presented a review of the facts known at the time about the disease and in her lecture stated that there was a great deal of fear and stigma attached to AIDS and that many sufferers were not getting the help they needed because of it. The First Tuesday Lecture Series continues today with RVC professors lecturing on important topics of the day.

Believe it or not, Gene Roddenberry, the creator of the original Star Trek series (and franchise) spoke at RVC in March of 1984 to a packed house of “Trekkies” in the RVC Student Center. The Star Trek series began in 1966 and launched a national phenomenon later arguably rivaled only by Star Wars in the 1970’s. The series won science fiction’s coveted Hugo Award. Roddenberry passed away in 1991 at the age of 70. 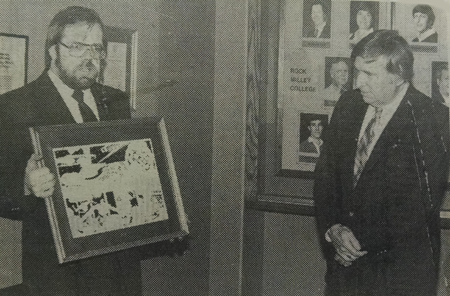 The RVC music department welcomed internationally renowned composer Václav Nen>lhýbel on March 20, 1984, as part of its Guest Artist Series. The concert featured the choral and instrumental music of Nelhýbel and was performed by the combined choral groups of RVC, Guilford High School and Rockford College Community Chorale, and the RVC Orchestra and RVC Community Band. Nelhybel received numerous prizes and awards for his compositions, which included a prize at the International Music and Dance Festival in Copenhagen, Denmark, for his ballet In the Shadow of the Limetree.

Harris Mosley, an RVC English instructor in April of 1984 wanted to bring in an expert to talk to his class about the life and times of William Shakespeare… so he hired an actor, Gordon Odegard (pictured below), to show up dressed as Shakespeare. The class responded well to the ploy. One student stated, “It gave us a closer look at what he is about and made his life more real to us.” 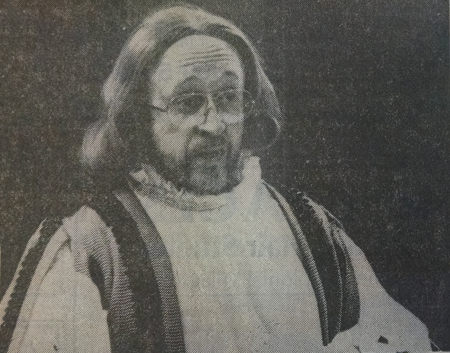 My Fair Lady was performed at Starlight Theatre in August of 1984 and played to packed houses and rave reviews. The production was directed by Neil Thackaberry and was the final Starlight musical he would direct as Michael Webb would become the new director at Starlight in 1985, a position he still holds today. Webb would direct My Fair Lady 10 years later on the Starlight stage in 1994. 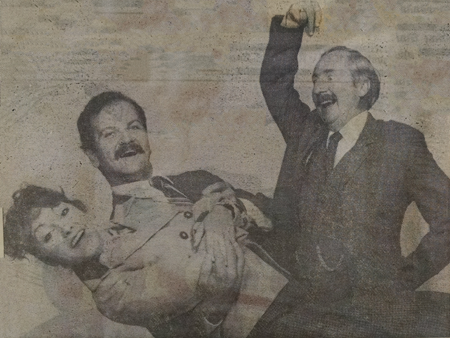 In 1984, Marty Voiles was a dominant force for the RVC Trojans basketball team and head coach Duey Hoff. Voiles averaged over 18 points per game in the second half of the season after bouncing back from a leg injury. Fast forward 30 years to 2014. Marty’s son, Brandt Voiles, finished his sophomore season at RVC with a national championship, the first in RVC history for men’s basketball. Brandt finished his RVC career with 387 points scored. He didn’t top his dad in the points department, but he can always flash that championship ring during any Voiles family basketball discussions.

Third-year Chicago Bears linebacker Jonathan Bostic will be at Rock Valley College, Thursday, May 21 for a free, open to...