RVC Mathematics Professor Darrell Ropp was honored with the Distinguished Life Achievement Award by the Illinois Council of Teachers of Mathematics (ICTM) in 1995. The award recognizes professors for distinguished and honorable service and significant contributions to the field of mathematics education in Illinois. Since 1963, the ICTM has honored just one person each year with this award and to this day Ropp is the only RVC professor to have received the award. 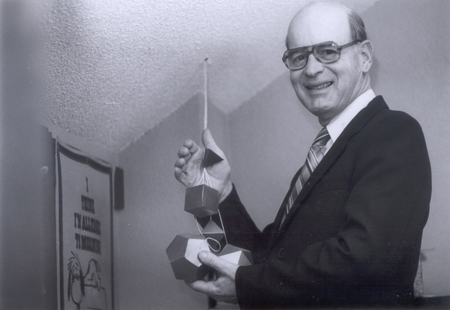 Before the dominance of the Misty Opat women’s basketball era we now enjoy, RVC had its first taste of success at the NJCAA tournament in March of 1995 when Heidi Hutchison led her Trojans squad to a third place finish at the national tournament in Corning, NY. The Trojans won their tournament opener 63-43 over Suffolk Community College and then fell 73-59 to Montgomery College before winning the third place game 76-65 over Herkimer County Community College. Heidi Munz was named to the all-tournament team after scoring 27 points in the opener and 18 in the third place game. RVC also made history by winning the NJCAA Rose Bataglia Sportsmanship Award in its first year being awarded at the tournament. “A lot of people commented on how the girls played with heart and how well they represented their school,” said Hutchison. “They turned a lot of heads with their play and left knowing they’d left their mark.” 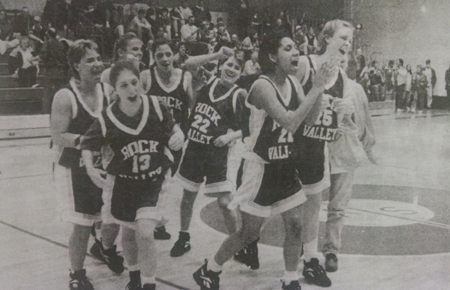 RVC sociology professor Kanwal Prashar was named an Outstanding Community College Faculty Member by the Illinois Community College Trustees Association (ICCTA). He was one of 35 instructors statewide to receive the award. Winners were nominated by their colleges based on criteria including effectiveness in the classroom, knowledge of subject matter, and impact on students. Prashar received his award from ICCTA on June 16, 1995, in Itasca, IL. Prashar had earlier that year been named Rock Valley College Faculty Member of the Year. Professor Prashar began teaching sociology at RVC in 1972 and officially retired in 2007. He is a professor emeritus and still teaches sociology and philosophy as a part-time adjunct instructor at RVC. 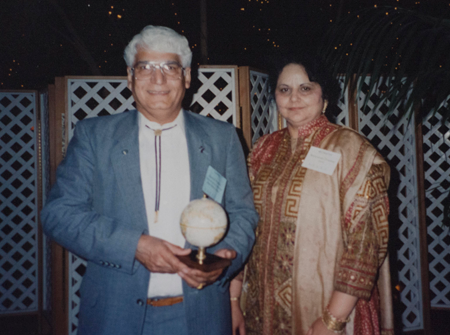 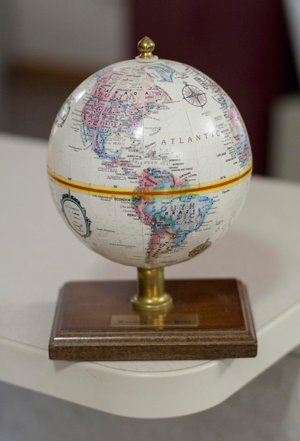 Yi Wu, a spring 1995 RVC graduate, was among a select group of students nationwide chosen to participate in one of seven science and engineering research projects through the U.S. Department of Energy. Wu was accepted for both projects he applied for, one on theoretical mathematics at Oak Ridge, TN, and the other on virtual reality at Argonne National Laboratory in Illinois. Wu chose to go to Argonne where in the fall of 1995 he had the opportunity to write computer programs to run simulated scientific experiments for CAVE, a three-dimensional virtual reality machine that allows scientists to surround themselves with complex chemical, industrial, and medical information. At the time there were only four such CAVE projects in the world. Wu graduated from RVC with a 4.0 GPA in math and science and a 3.96 overall GPA. Wu was quoted as saying, “I’ve always wanted to do something challenging, something exciting, something new, something adventurous.” 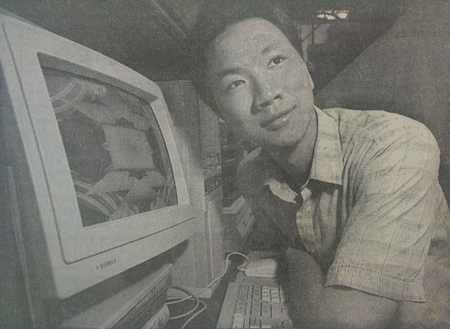 In the spring of 1995, the RVC Board of Trustees approved the changing of the school colors from yellow and brown to navy blue and gold, and the changing of the RVC nickname from Trojans to Golden Eagles. A committee was formed to decide on the new colors and it also recommended four suggestions for a new nickname: Golden Eagles, Rockets, Blue Jays, or Raptors. As part of the exciting new rollout, a new mascot was also established and a naming contest was held. RVC nursing student Marjorie Kropp won two free classes at RVC for submitting the winning mascot name: Reggie Reagle. Reggie made his debut on October 21, 1995, at the homecoming football game. Although his appearances were rarer as the years went on, Reggie remained the RVC mascot until 2013 when Arvee arrived on the scene. Stay tuned for that story in December! 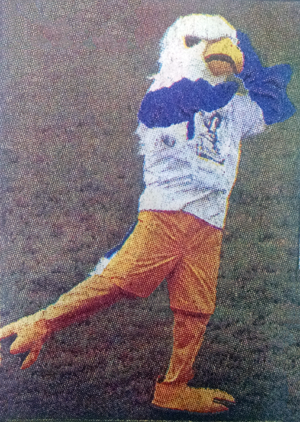 The debut of Reggie Reagle the Golden Eagle at the homecoming football game on October 21, 1995.

On December 5, 1995, RVC professor of geology Tom Guensburg’s First Tuesday lecture, The Rise and Fall of Dinosaurs, set the record straight about the intelligence of dinosaurs. In short, Guensburg told his audience that what millions of movie-goers saw in the 1993 blockbuster Jurassic Park was “beyond belief.” He said dinosaurs would never stalk people because they simply were not smart enough. “Our best guess is that the most intelligent dinosaurs were about as smart as an ostrich,” said Guensburg. He went on to say of the film’s portrayal of velociraptors, “It’s difficult to imagine these animals with conniving behaviors.” In the film they are shown as highly intelligent and sophisticated animals even capable of opening doors. Believable or not, movie audiences haven’t seemed to care. The Jurassic Park films have combined to gross over 3.5 billion dollars worldwide. The most recent installment released this summer, Jurassic World, has alone grossed over 1.5 billion dollars worldwide and is already the third highest grossing film of all-time behind only Avatar and Titanic. 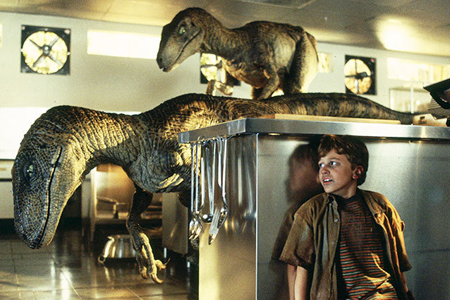 Is it possible Hollywood embellished the intelligence of dinosaurs in Jurassic Park?