The college’s new Golden Eagle mascot was named after a “Name the Mascot” contest that took place in January of 2014. The name Arvee was chosen from over 350 entries that were received. Ten finalists were invited to a special ceremony where the winning name was revealed at halftime of the RVC men’s basketball game on February 5, 2014. The winning name of Arvee was submitted by Cristina Szterensus, who in addition to receiving a great prize package also has bragging rights for life for naming Arvee for Rock Valley College! You can follow Arvee on Facebook and Twitter and you can even join Arvee’s Army, the official rooting section of RVC Athletics. 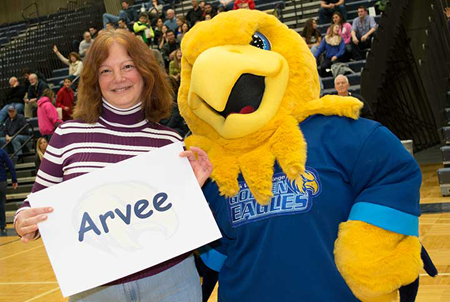 Cristina Szterensus posed with Arvee after the revealing of the “Name the Mascot” contest winner on February 5, 2014.

On Saturday, March 15, 2014, head coach Craig Doty and his team won the college’s first ever national championship for men’s basketball after defeating Caldwell Community College, 79-69, in Loch Sheldrake, New York. Freshman LT Davis was named the tournament’s Most Valuable Player after scoring 21 points in the championship game and averaging 18 points per game in the tournament. Freshman Jared Mayes was also named to the NJCAA all-tournament team after scoring 22 points per game and 55 points combined in the semifinals and finals. Mayes was later named NJCAA Division III Player of the Year. Coach Doty was named Don Klaas Region IV coach of the year, District 2 Coach of the Year, and Gary S. Cole Coach of the NJCAA Tournament. 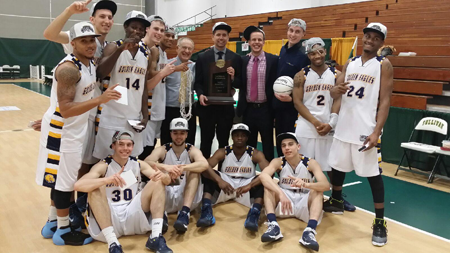 Not to be outdone, head coach Darin Monroe and his softball team captured the program’s first ever national championship on May 17, 2014, after a 2-1 win over Herkimer County Community College. The Golden Eagles scored all of the runs they would need in the bottom of the first inning as sophomore Amanda Blankenship was dominant on the mound for RVC. She allowed one earned run on four hits with just one walk and nine strikeouts in seven innings pitched in the title game. For the tournament, Blankenship finished 4-0 with a 0.30 ERA with just three walks and 34 strikeouts in 23 1/3 innings pitched to claim tournament MVP and Pitcher of the Tournament honors. The Golden Eagles finished a remarkable season with a national championship and a then program single-season record 42 wins. Monroe was named Region IV Coach of the Year, N4C Coach of the Year, and NJCAA Coach of the Tournament. 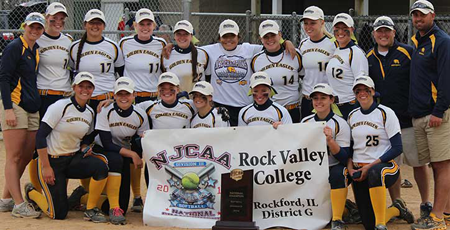 Dr. Paul McCombs was honored by the Illinois Section of the Mathematics Association of America (ISMAA) as the recipient of the 2014 Award for Distinguished College or University Teaching of Mathematics at their annual conference on March 28, 2014. The award honors college or university teachers who have been widely recognized as extraordinarily successful and whose teaching effectiveness has been shown to have had influence beyond their own institutions. Dr. McCombs was only the third professor from a community college to ever win the award and the first since 2002. Dr. McCombs was also recognized as Rock Valley College’s Faculty of the Year in January of 2014.

Meanwhile, Professor Rodger Hergert was honored by the Illinois Mathematical Association of Community Colleges (IMACC) as the recipient of the Distinguished Service Award at their annual conference on April 4, 2014. The award honors one member each year for a career of outstanding service to IMACC. The requirements for the award take into account years of service with the organization as well as time served as an elected officer with IMACC, and involvement on IMACC committees and conferences.  Professor Hergert not only served as President of IMACC but was also the ConneXion (IMACC newsletter) editor, and has been continuously involved with IMACC committees.

On April 8, 2014, a press conference was held to announce the appointment of Michael Mastroianni as Rock Valley College’s sixth president.

“Over the last nine months our Board has participated in a presidential search that looked at a number of dynamic individuals who all presented strong ideas on where Rock Valley College should head in the future,” said Michael P. Dunn, Jr., RVC Board Chair. “We believe Mike not only shares those strong ideas, but has the background to immediately build on our current momentum. Throughout his role as Interim President, Mike demonstrated to our Board and our community what he will offer as our next President.” 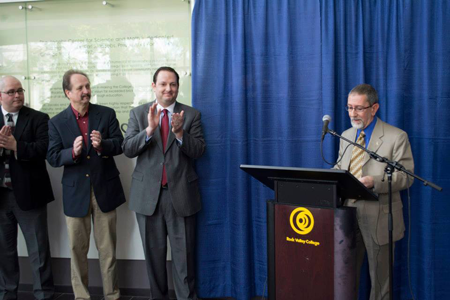 Northern Illinois University President Doug Baker and Rock Valley College President Mike Mastroianni signed an innovative reverse transfer agreement on May 28, 2014. The agreement allows eligible NIU students who transferred from RVC without associate degrees to earn the two-year degree using credit from NIU courses. This reverse transfer option is beneficial for students who have transferred from RVC to NIU before earning their associate’s degree.  Credits completed at NIU are transferred back to RVC and used to satisfy the degree requirements for an associate’s degree, similar to how credit is transferred from a community college to NIU, just in reverse.

“In a time when we desperately need more advanced education in our community, this agreement makes that goal easier to attain,” Mastroianni said.

“Students want a hassle-free transfer process and to receive credit for the work they do,” added Baker. “With this reverse transfer agreement, we’ve got that.” 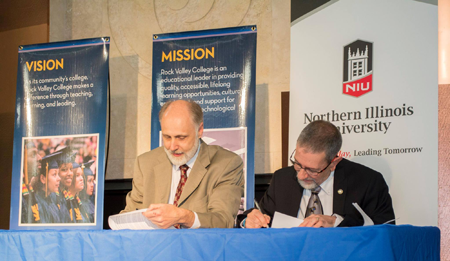 The awards and honors poured in for Rock Valley College Mass Communication student Tom Doherty and his film, The White Room during 2014, including: 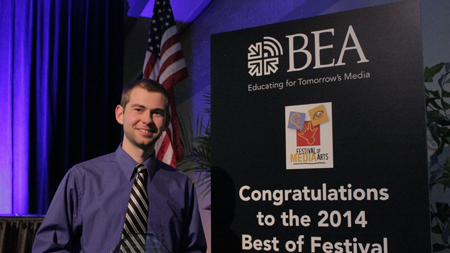 Tom Doherty at the Broadcast Education Association (BEA) Festival of Media Arts in 2014.

The college broke ground on its new Aviation Maintenance facility at the Chicago Rockford International Airport on July 18, 2014. The 40,000 square foot facility has four classrooms, four labs, and an aircraft hangar, allowing the college to triple its enrollment in the program. By comparison, the previous facility had 15,000 square feet with one classroom, one lab, and a small hangar area. The new facility officially opened for classes in August of 2015. 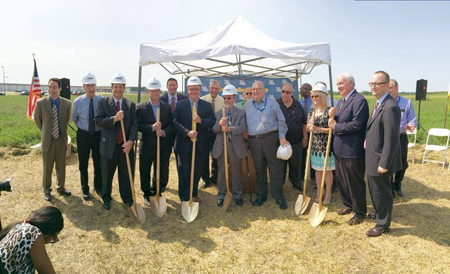 Mike Webb was recognized on July 23, 2014, prior to a performance of Honk!, for his 30 years at Starlight Theatre. Mike was presented a plaque from President Mike Mastroianni which thanked him for “30 years of making miracles happen on the Starlight stage.” Alderman Frank Beach was also on hand to present a resolution from the city of Rockford stating that Mayor Morrissey had declared July 23, 2014, as “Mike Webb Day” in Rockford.

On September 23, 2014, Michael Monaghan from ICCTA (Illinois Community College Trustees Association) was on hand at the RVC Board of Trustees meeting to present Trustee Randy Schaefer with the “25 Year Trustee Award” to honor Schaefer’s 25 years of service as a Rock Valley College Board of Trustees member. The award is presented to a trustee whenever he/she achieves this elite level of service. Trustee Schaefer is an RVC alumnus who began serving on the RVC Board starting in December of 1989. In the 50 year history of ICCTA, more than 2,200 elected trustees have served in Illinois, but only 28 (1%) have ever reached 25 years of service and have subsequently received this special award. 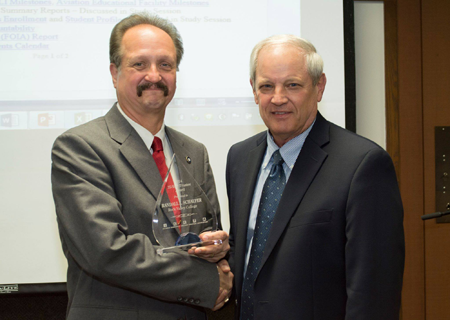 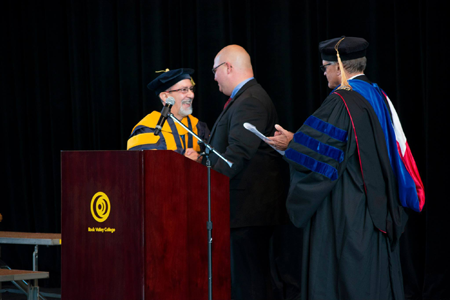 Rock Valley College’s Model United Nations (Model UN) team has enjoyed astounding success for over a decade now, representing the college proudly at national and international conferences since 2003. The team attended the National Model United Nations (NMUN) Conference in Washington, D.C., October 31-November 2, 2014, where they were chosen as an Outstanding Delegation for the fifth year in a row. The RVC team was one of just 11 schools recognized as an Outstanding Delegation.

Here’s a look at some of the RVC Model UN team’s accomplishments over the years: 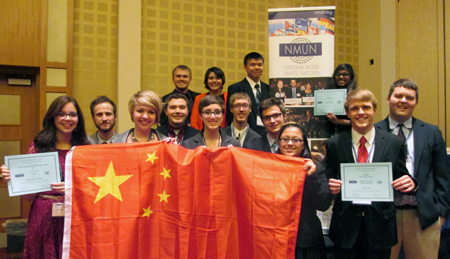 The delegates from RVC at the 2014 National Model United Nations (NMUN) Conference in Washington, D.C., represented China and included: 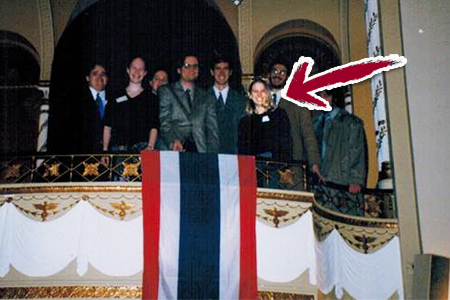 The first RVC MUN Team at the Harvard National Model United Nations in 2003. Do you recognize the delegate in the front to the right of the flag? That’s Crystal Dinwiddie! She was a delegate for RVC MUN as a student in 2003 and now she serves as one of the team advisors and is an Assistant Professor of Sociology!